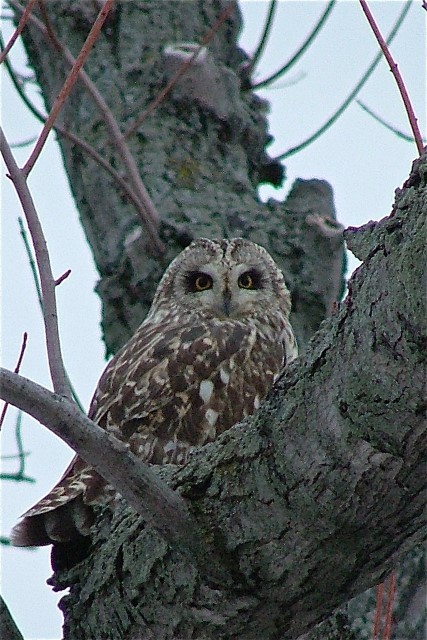 Third time’s a charm. I’ve tried to participate in this regular outing for the last 3 years. One year it was cancelled because of nasty weather, another time I had a sick hubby and a sick dog at home and couldn’t go. I’m not an experienced birder, so outings like this present great learning opportunities for me.

Finally, on Sunday, January 17, I met with the group of 10 birders led by Tim Lucas at the Port Dover pier. Just before I arrived a juvenile Bald Eagle sailed over the pier, I had missed it by mere seconds. One man had found us on the internet and came down from Mississauga. He later said it was well worth it. The forecast had the temperature falling well below freezing in the afternoon with light snow tapering off.

While waiting for everyone to arrive we had a chance to observe a large raft of Mallards by the pier. Ring-billed Gulls and a few Herring Gulls were lined up along the opposite pier. I teamed up with Len and Jan Grincevicius and we all drove off east along the lake shore.

At a stop near a creek Tim spotted a Northern Harrier hunting over a field. Repeated pishing didn’t manage to lure birds out of the shrubs and trees, just a quick flash of a few Juncos by the road.

Near Nanticoke a Rough-legged Hawk performed its balancing act with outstretched wings on a tree top in the distance. On the lake side we found a large gathering of water fowl: 10 Tundra Swans mingled with a couple of hundred Canada Geese. More large flocks arrived as we watched. Off to the side was a raft of American Black Ducks, Mallards and Buffelheads. Among them, a Black Duck-Mallard hybrid.

A mature Bald Eagle sat in a tree by the shore. It lifted off for a leisurely cruise and another Eagle promptly took its place in the tree. A Northern Harrier came swooping by quite close disappearing behind a farm house scattering a number of smaller birds. It didn’t re-appear, so we figured it had caught its dinner. Just before we continued our trek a Black-backed Gull glided by with slow wing beats.

On the way to Selkirk Provincial Park another “Roughy” soared across the road above us easily recognized by its light underside and black wrist patches.

The woods at the park first seemed so quiet in the grey afternoon light. Tim whistled some Screech Owl calls hoping for a reply. Tim is a very talented bird call mimic! We stood still listening. Nothing. Then a few call notes and movements up in the trees caught our attention. 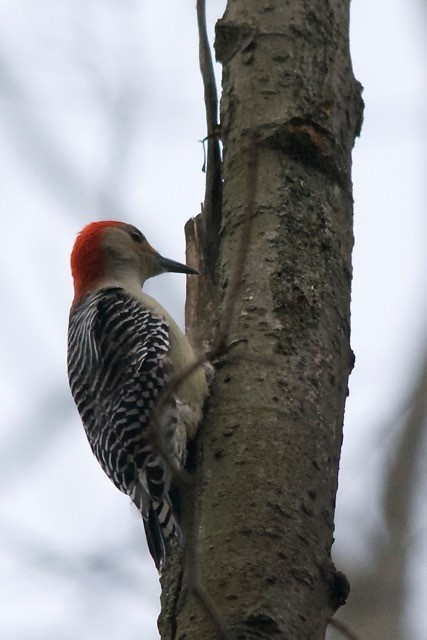 A few Red-bellied Woodpeckers, Downy Woodpeckers, White-breasted Nuthatches, Blue Jays and Chickadees and a Red Squirrel were busy foraging in the branches. Tim caught a glimpse of a Red-tailed Hawk flying behind the trees.

Along the road we kept an eye out for Short-eared Owls roosting in pines and spruces. Again, nothing. We had also hoped to see the odd flock of Snow Buntings, but they, too, were absent.

The temperature was dropping as the sun was setting and a chilly wind came up from the north west. In Selkirk we made a quick pit stop at the Sunflower Cafe for hot chocolate to warm numb fingers and the insides, too. One more try to find the Short-eared Owls as the dusk was gathering. Tim stopped along a side road just as 6 Owls burst out of a stand of small conifers.

Regardless of the bone-chilling wind everyone got out of the cars with binoculars, scopes and cameras at a-ready. The birds put on a wonderful show swooping in and out of the trees, over the road and fields, posing for a moment on a branch and flying off again. That was definitely the icing on the cake. What a terrific afternoon!

Posted On September 6, 2016
The 2016 Summer Lotus has the first of two articles on the 2016 Birdathon. The second part will be in the next issue. There's lots…