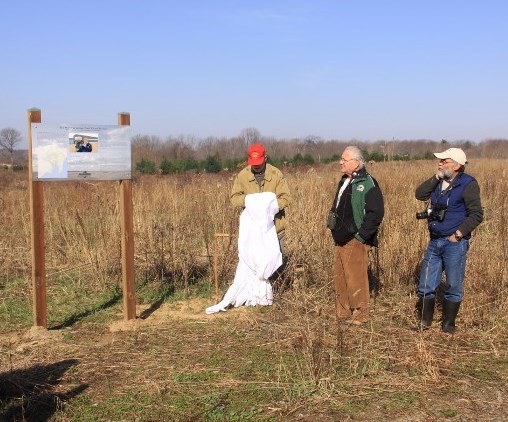 Download the PDF of this article, which contains many more beautiful photos.

By the time this report is published we hope many of you have had the opportunity to explore this beautiful and diverse tract.

Saturday, April 18 was glorious: Calm, sunny and warm. What else do you want from a spring day after a particularly nasty winter? About 50 people attended the unveiling of the new sign at the Long Point Basin Land Trust (LPBLT) property along Front Road. 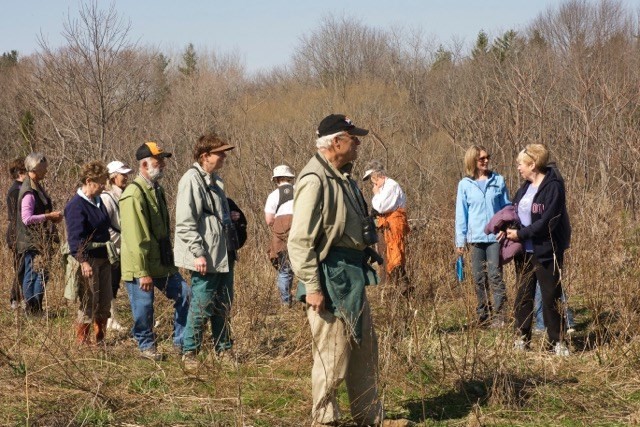 You may recall that a couple of years ago NFN donated a substantial sum to LPBLT toward the purchase of this property. Al Robinson, former president of NFN, did the honours of unveiling the sign. Peter Carson, President of the LPBLT, gave the introductory speech and George Pond replied with a few words of wisdom to the delight of all those attending. 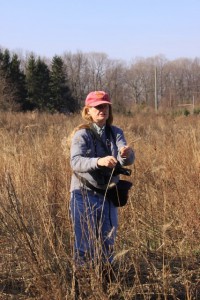 After the dedication ceremony Mary Gartshore lead the group on a hike though the nature reserve. This roughly 80 acre former fruit orchard has already undergone a fair amount of restoration.

The upland meadows have been reseeded with native flora and shallow ponds were created in the valley beyond were a formerly excavated drainage creek already existed.

Approaching the wetland, we flushed a pair of Sandhill Cranes who had been foraging in the sedges. Another large pond was teeming with activity: American Toads and Leopard Frogs were singing and several Midland Painted Turtles were basking on fallen trunks and branches.

Two snake hibernaculas have been installed on the property. We had proof of that these structures work: a small dark phase Garter Snake was peeking out between the rocks.

A Hike in the Wilson Tract

A week later Mary and Peter lead us on another interesting hike in the Wilson Tract. This beautiful Carolinian forest tract is owned by the Long Point Region Conservation Authority.

This was another well-attended outing, although not much of the regular spring flora had yet emerged because of a late, cool spring. Migrant birds were also largely absent for the same reason. Nonetheless, the forest still yielded many interesting features. Among them were both the Round-lobe Hepatica and Sharp-lobe Hepatica, blue and white forms, already flowering on the forest floor and the spiky shoots of the False Solomon’s Seal poking out through the leaf litter.

We found the dry flower stalks and the overwintering green leaves of the Putty Root Orchid by the trail. Tough Purple-tooth Polypore fungi also persisted from the year before on dead hardwood trunks and branches and a gnarly burl adorned the base of a mossy tree trunk. Gelatinous masses of Salamander eggs were visible in a small pond.

At the end of the hike Mary pointed out a now rare, very large Butternut tree.

Posted On July 26, 2015
By George Pond Download the PDF of this article, which contains many beautiful photos. “Turn down the next road! Yesterday there was a flock of…

Posted On March 12, 2015
By: Cody Rowe There is something about the call of the outdoors that brings birders together, regardless of the weather, and Sunday January 18, 2015…