Tales from The Tip 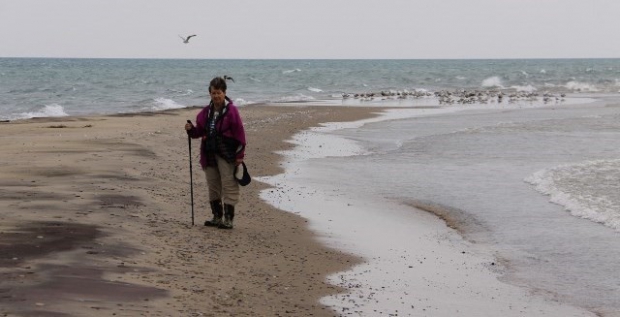 Is anyone interested in spending a week at the Long Point Tip?” Diane Salter inquired during one of our watercolour painting sessions in Port Rowan. Diane had won the “Trip to the Tip” as a Birdathon prize supporting the Long Point Bird Observatory (LPBO). Wow. I jumped at the chance!

It turned out that three of us, Diane, Karin Jonasson and I plus Stu McKenzie and Ron Ridout clambered into the aluminium craft used to ship supplies and bird banders to and from the Tip on the morning of October 6. The boat was loaded with gear and supplies, both ours and the banders’. We had to bring food for the week + drinking water (and wine), sleeping bags, clothing for all weather conditions and cameras, binoculars and other toys.

Diane also brought bird seed and feeders plus a few small solar lights, which were helpful in finding your way to the facilities after dark.

Those of you who haven’t been out at the Tip might not know that there are other buildings besides the Light House. Nearby are the old light house keepers residence, now accommodations for bird banders and a large workshop including facilities for banding. The old foundation where one of the previous light houses was standing prior to being washed away in a storm is still visible. Winter storms regularly re-shape the contours of the Tip. Nestled against the dunes on the lake side of the Tip is the guest cabin. It is outfitted very comfortably for 6 – 7 people.

There are a mud room, kitchen and living space downstairs and a sleeping loft upstairs. The kitchen has a propane stove and fridge and a hand pump for washing-up water at the sink. A small solar panel charges a battery for recharging your cell phone, tablets, camera battery, etc. No indoor plumbing, but a short distance down a path is a convenient outhouse. We compared names for the facilities from around the world: Down Under it’s called “Long Drop”, the Germans call it “Plumpsklo” (the toilet that goes splat!)

We were lucky, the early October weather was glorious, except for one night when a front came through with high winds shaking the cabin. Diane had selected this time as being the best for migratory birds. See our Bird List at the end of this article. 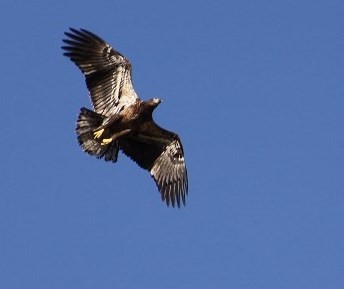 Every day we kept watch from the large deck outside the cabin and during our regular walks on the beach and the trails. Sharp-shinned Hawks, Cooper’s Hawks and many other raptors were hunting smaller birds. The LPBO banders caught an un-banded Peregrine Falcon in their nets; it must have come from way up North to have escaped banding! A mob of Turkey Vultures came up along Long Point every day, but stopped at the Tip, obviously puzzled about what happened to the land?

They circled for a while and turned back towards the base of Long Point. The Vultures, and other migrants who depend on thermals, don’t like to fly over water.
The Junipers dotting the Tip were teeming with Kinglets, both Ruby-crowned and Golden-crowned, Eastern Phoebes and many other small birds keeping the banders very busy. On one of the best days they caught and banded well over 300 birds. Out on the very end of the Tip a large number of Gulls held court and a juvenile Bald Eagle was feasting on the carcass of a Black-backed Gull.

A school of smelt in the bay caused a virtual feeding frenzy: Gulls, Common Terns, Cormorants and other water fowl joined in the feast.

You’d expect that the environment out there on the Tip would be pristine, but sadly this is not the case. Hulks of rusting unidentified pieces of machinery, refrigerators, the ever-present old tires and plastic balloons plus other jetsam and flotsam is littering the beaches and the dunes. One can only hope that future generations, with education and increased awareness of the environment, will stop treating the Great Lakes as garbage dumps. Some of the trash had been put to good use, though: The hulk of an old refrigerator was used as a garbage bin and a bird had built a well-protected nest inside an abandoned hibachi. Someone had brought a white plastic chair to the beach and left it there. Young cottonwood saplings were now growing up through the seat slats.

One day Karin and I spent the afternoon smearing watercolour on paper and experimenting with printing various items we found lying around, including a dry dead fish (Japanese Gyotaku-style), and Stable Flies – there was an endless supply of the pesky flies both inside and outside. In the month of April, 2016, we will have an art show at the Port Rowan Public Library titled “Images from the Long Point Tip”.

Time passed, one beautiful day after another. On October 10th I even ventured for a swim in Lake Erie: Refreshing!

We were up each morning with the sun, a quick breakfast and a beach walk out to the end of the Tip. On the way back to the cabin we’d watch the banding crew pick the morning catch of birds out of the nets. The trail to the cabin winds its way through the sparse vegetation on the tip. Scattered gnarled Cottonwoods and dense Junipers dominate the landscape. Reeds and sedges put up a fight against invading Phragmities in the wetlands. A crew of four men were also fighting these invaders.

A few late flowering plants could still be spotted between other withering stems: Greater Fringed Gentians (Gentianopsis crinita), Grass-of-Parnassus (Parnassia glauca) and even a small Lady’s Tresses Orchid (Genus Spiranthes). Several mushrooms dotted the dunes. I later identified them as Sandy Laccarias (Laccaria trullisata), an edible species common in the Great Lakes sandy shore lines. They would have made a tasty accent to our dinners! There were signs of other wildlife as well: Fresh paw prints on the beach every morning left by both Coyotes and Raccoons during their nocturnal forays searching for some tasty morsels. Mice made good use of the fallen bird seed.

Large spiders excavated perfectly round burrows kicking the sand into a circular pattern around them. A very late Monarch and its caterpillar had unfortunately “missed the boat”.

As the evening fell over the Tip we would gaze at the sunset over the distant mainland in the west. The banders played recorded calls of the Saw Whet Owl in the night expecting the migration to begin as we neared the new moon.

Upstairs, in my bunk, I could see the light house flash every 8 seconds.

Did you know that you can rent the cabin on the Tip? 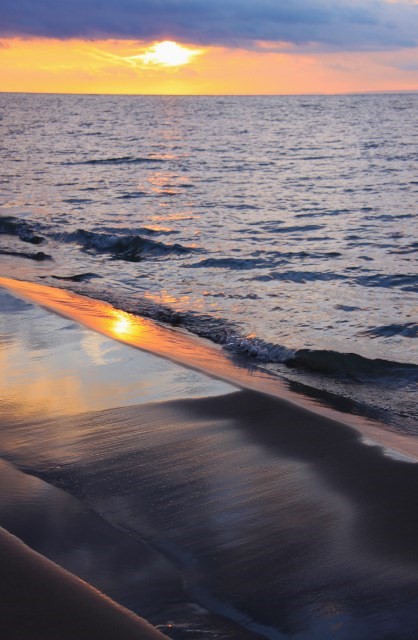 Birding in Cuba: A Once-in-a-Lifetime Experience

Posted On June 26, 2013
by: Bernie Solymár My first trip to Cuba was in 2004, as part of a group of Canadian agronomists studying sustainable agriculture methods in Cuba.…