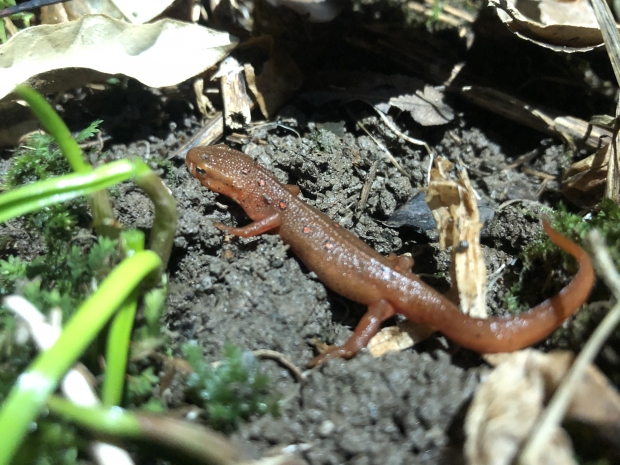 Note: Salamanders should never be handled with bare hands as skin oils and even soap residues will damage them.

The three salamanders covered in this article have an aquatic stage in their development and are considered mole salamanders as opposed to woodland or Plethodontid which breath through their skin. 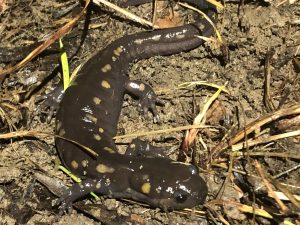 Yellow-spotted salamanders are our largest species of salamander. They are readily recognizable by their black colour and pattern of bright yellow or orange spots. They reach a length of 20 cm (8 in.). The head, body and tail are dark grey to blue-black. Their belly and sides are lighter blue-grey. Along the back, tail, sides, head, and legs are two uneven rows of up to 54 bright yellow spots.

These salamanders range over much of North America.

Deciduous and mixed forests are the preferred habitat, especially those located near woodland ponds for breeding. Smaller habitats created by leaf litter, logs and rocks are used for foraging and shelter.

Adults spend most of their day hiding underground or beneath rocks and logs and come out at night to eat spiders, insects, snails, slugs, earthworms and beetles. The juveniles will eat snails and immature aquatic insects.

When threatened, spotted salamanders secrete a mild sticky toxin from their backs and tails that dissuades predators such as skunks, raccoons, turtles, chipmunks, squirrels, opossums, and snakes from eating them.

Breeding occurs on rainy nights in March/April when they migrate to their breeding wetlands. Spermatophores, which are similar in size to a grain of rice, are attached to objects on the bottom of the pond. Females will collect the spermatophores to fertilize their egg sacks. Up to 300 eggs, in two to four jellylike masses, are then laid underwater. The eggs are attached to pond plants, submerged sticks or other vegetation. After four to seven weeks, the eggs hatch into aquatic larvae. The larvae will then develop into terrestrial juveniles before the end of the summer. For males, sexual maturity is reached between ages three and six. For females, sexual maturity is reached by age seven. Adults may only breed once every two to three years. Once breeding season is over, adults will spend most of their time underground in burrows and cavities. This is a long-lived species, reaching 30 years of age or more in the wild. 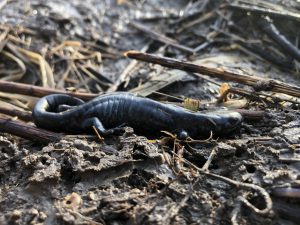 The Blue-Spotted Salamander is a small to medium-sized salamander with a narrow head and dark black body with bright blue flecks. The long, laterally compressed tail makes up nearly half of the total body length, which ranges between 3.9 and 5.5 inches. The blue-spotted salamander can be distinguished from the similar-looking young Jefferson salamander by its narrower head and larger spots. It also uses vernal pools with organic debris. Eggs are deposited singly or sometimes in clusters underneath leaves or at the base of tussocks. It feeds on insects, slugs, worms, and other small invertebrates.

The Jefferson Salamander is a large, gray to brownish-gray salamander with fine markings of light blue to silvery flecks on the limbs, lowers sides, and tail. Adults measure 4–7 inches in total length. The tail is laterally compressed (especially in sexually active males) and is approximately the length of the body. It has distinctively long toes and a stocky build. Males tend to be smaller than females. Larvae have bushy, external gills, and a wide head. They inhabit mature deciduous and mixed deciduous-coniferous forests and woodlands. Vernal pools and shrub swamps are used for breeding and creating egg masses. 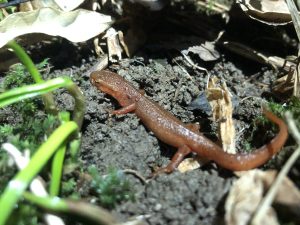 The usual life cycle of this species includes three distinct post-hatching stages: (1) aquatic larva, (2) terrestrial (juvenile) eft, and (3) aquatic adult. The red spotted newt frequents small lakes, ponds, and streams or nearby wet forests. It has a lifespan of 12 to 15 years in the wild, and it may grow to 5 inches in length.

Egg clusters of 200-400 are attached to submerged aquatic vegetation or fallen leaves in the water. The eggs typically hatch in two to four weeks. In late summer or early fall, aquatic larvae develop into terrestrial juveniles (efts).

Efts have slightly rough, dry skin and are bright orange or red, and sometimes even brownish, in color. After two or three years, the eft completes the second metamorphosis to become aquatic adults, with skin that is dull olive green dorsally, with a dull yellow belly, but retains the eft’s characteristic black-rimmed red spots. These spots, and the efts coloration, are warnings of toxic skin secretions.

The newts can live up to 15 years in the wild.

Click the link below to access a video of salamanders and egg clusters in a vernal pool (Video credit: Leanne Lemaich)

Posted On November 8, 2015
Report compiled by Inga Hinnerichsen The feral cat issue is a major one in Norfolk (as it is elsewhere). Research backs that up. Feral cats…