Status: Threatened — “Threatened” means the species lives in the wild in Ontario, is not endangered, but is likely to become endangered if steps are not taken to address factors threatening it.

Date added to the Species at Risk in Ontario List — The Blanding’s Turtle was already assessed as threatened when the Endangered Species Act took effect in 2008. A reassessment in May 2017 confirmed this status.

What it looks like:
The Blanding’s Turtle is a medium-sized turtle easily identified by its bright yellow throat and chin. Unlike most Ontario turtles that have wide, flatter shells, the Blanding’s Turtle has a domed shell that resembles an army helmet. Its shell is black to brown with yellow flecks and streaks and can reach 27 centimetres long. Its head and limbs are black-grey and the bottom shell is rich yellow. 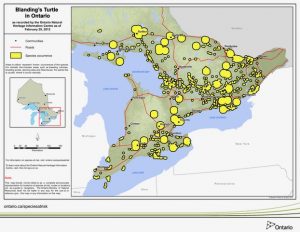 Where it lives:
Blanding’s Turtles live in shallow water, usually in large wetlands and shallow lakes with lots of water plants. It is not unusual, though, to find them hundreds of metres from the nearest water body, especially while they are searching for a mate or traveling to a nesting site. Blanding’s Turtles hibernate in the mud at the bottom of permanent water bodies from late October until the end of April.

Where it’s been found in Ontario:
The Blanding’s Turtle is found in and around the Great Lakes Basin, with isolated populations elsewhere in the United States and Canada.

What threatens it:
The most significant threats to the Blanding’s Turtle are loss or fragmenting of habitat, motor vehicles, and raccoons and foxes that prey on eggs. Illegal collection for the pet trade is also a serious threat. Blanding’s Turtles are slow breeders—they don’t start to lay eggs until they are in their teens or twenties—so deaths of breeding-age adults can have major impacts on the species.

What you can do:
Report a Sighting — The Ministry of Natural Resources and Forestry tracks species at risk such as the Blanding’s Turtle. You can use a handy online form to report your sightings to the Natural Heritage Information Centre. https://www.ontario.ca/page/report-rare-species-animals-and-plants Photographs with specific locations or mapping coordinates are always helpful.

Be a good steward
Private landowners have a very important role to play in species recovery. If you find Blanding’s Turtle on your land, you may be eligible for stewardship programs that support the protection and recovery of species at risk and their habitats.