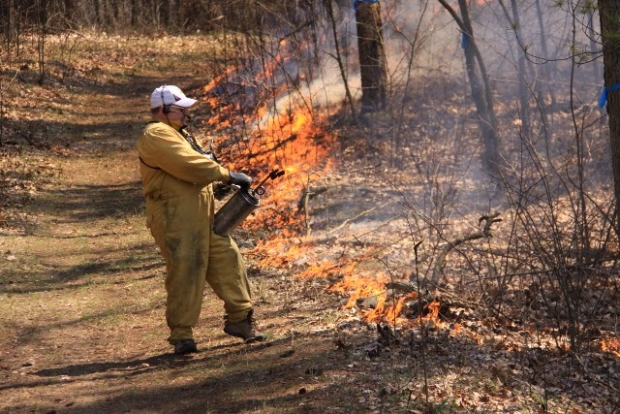 In the past year I have helped out with ongoing work at the St. Williams Conservation Reserve. The forest reserve consists of mainly two tracts: the Turkey Point Tract and the Nursery Tract stretching north from Hwy. 24 between Forestry Farm Road and East Quarter Line Road.

As the glaciers were melting after the last ice age and water levels began to drop, the receding shoreline left behind a series of sand dunes. Eventually, these dunes were overgrown with local vegetation.

The area was cleared by early settlers and heavily eroded by the late 1800s. In the early 20th century it was planted largely with pine varieties to prevent further erosion and as lumber crop trees. Small pockets of Black Oak savannah remained on higher, dry ground.

Part of the ongoing work in the Conservation Reserve are efforts to restore these areas of oak savannah. Over time, pine saplings and other invading species have begun to take over and crowd the oaks. Some areas have been selectively logged to open the canopy, allowing more sunlight to encourage new growth. In the past few years, during the winter and early spring months, there have been work bees organized by the St. Williams Conservation Reserve Community Counsel. The volunteer crews have been removing young pines in several areas and clearing truckloads of garbage along the 6th Concession Road, a stretch of sand road between Forestry Farm Road and East Quarter Line Road, which some people are considering to be a convenient garbage dump, unfortunately. Recreational use by motorized vehicles is allowed in part of the reserve. Elsewhere, trails, old logging roads and fire roads are reserved for equestrian and foot traffic. 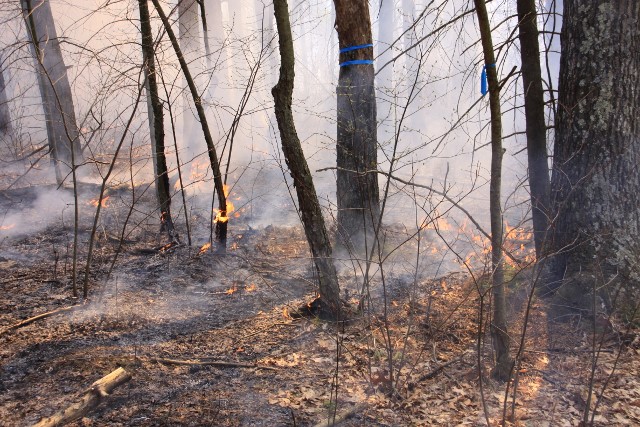 Last Spring, we prepared three separate tracts for prescribed burns. The areas had been surveyed in advance. Species at risk, such as Flowering Dogwood and Spotted Wintergreen, had been flagged. Standing hollow snags were also marked. Each area had been circumscribed by cleared borders to prevent the fire from spreading to other areas. Our task was to rake old dry debris away from the flagged saplings and plants to prevent the fire from damaging the protected species. The ground around the snags was also cleared in case the fire would ignite the dry insides where it would smolder risking the start of a forest fire.

The objective of the burn was to clear dense undergrowth, mostly Red Maple saplings, Autumn Olive and other invasives. The Red Maple is becoming one of the dominant species in the Carolinian forest. Clearing the undergrowth also allows the grasses and other herbaceous plants typical to the oak savannah to return to the area freshly fertilized by the ashes from the burn.

A professional crew conducted the burn. First, they burned a swath along the lee side of the area against the dividing border making it even wider. Next, they moved over to the windward side. The low fire moved rapidly across the tract fanned by the wind behind it.
This Spring, the St. Williams Conservation Reserve Community Counsel is planning another prescribed burn. Volunteers are always welcome to help out with the work. An afternoon in the forest with likeminded people, fresh air and some exercise makes for good times. Anyone interested in these projects, please, contact Audrey Heagy at: coordinator@swcr.ca 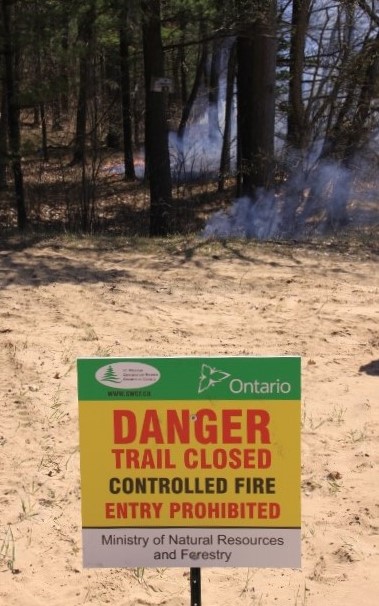