We couldn’t have picked a better time for our recent trip to New Zealand!

The summer is still going strong in February (like our August), but the high tourist season is already tapering off and the local kids are back in school. During the week the beaches are less busy and you’ll have a better selection of campsites.

On the other hand, this is not a great time to visit Northern Australia! The “Wet” is in full swing, the outback is flooded by torrential rains, devastating cyclones tear at the north and north east parts of the continent. The South is usually hot and dry with plenty of bushfires raging.
Roughly 80 million years ago the land mass now known as Zealandia broke away from the supercontinent Gondwana together with Australia. This continent has since eroded away and risen again from the Pacific Ocean straddling the boundary between the Pacific and the Indo-Australian tectonic plates. The map on the next page illustrates the geological features, including the sub-oceanic topography and the faults along the areas of the volcanic and geothermal activities so characteristic to New Zealand.

Tucked away deep in the South Pacific Ocean the Islands now known as New Zealand stayed uninhabited by humans until the 1300s – that’s only about 800 years since the first Polynesians began arriving. Australia has been inhabited by humans about 50.000 years.
The Polynesians, the ancestors of the Maoris, and the rats and dogs they brought with them, hunted the Moas and many other flightless birds to extinction in their first 150 years. The Europeans didn’t start settling the islands until after Captain Cook’s voyages in the late 1700s.
Today there are more than 30.000 introduced plants and tree species and hundreds of birds and mammals, at least 12 of them predators. 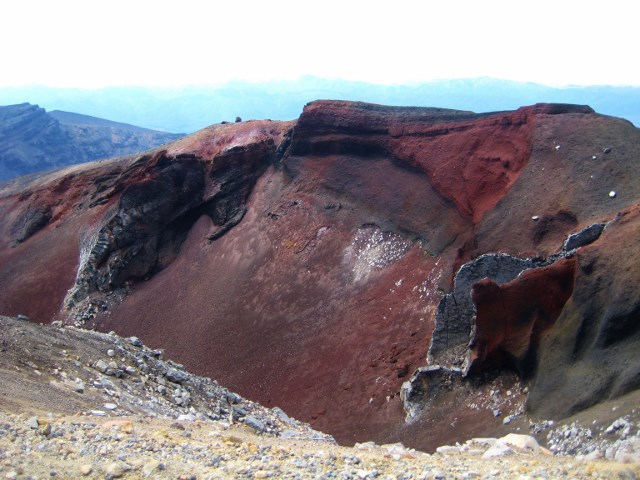 In the following all Maori names are shown Italic.

In Tongariro National Park, the oldest in NZ and the 4th oldest in the world, I had the opportunity to experience some of the volcanoes up close and personal during an all-day 19.4 km steep and gnarly tramp (hike): Ruapehu, Ngauruhoe and Tongariro. Ngauruhoe was featured in the Lord of the Rings movies as Mount Doom. 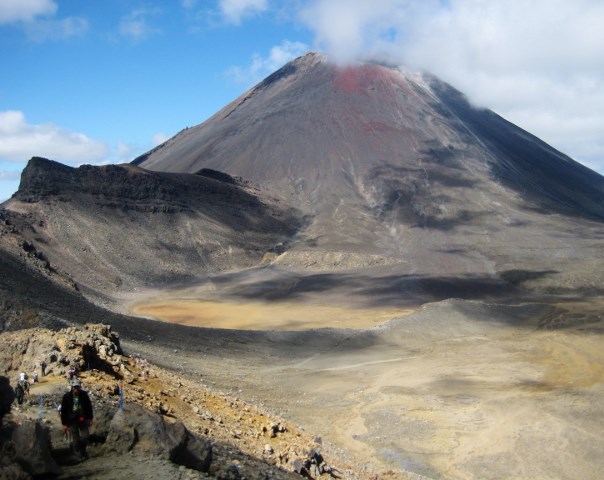 In the middle of the central plateau lies a dormant supervolcano. Lake Taupo and the surrounding huge caldera are the remainders of a violent explosive eruption ca. 1800 years ago. There is a similar supervolcano in North America: Yellowstone. 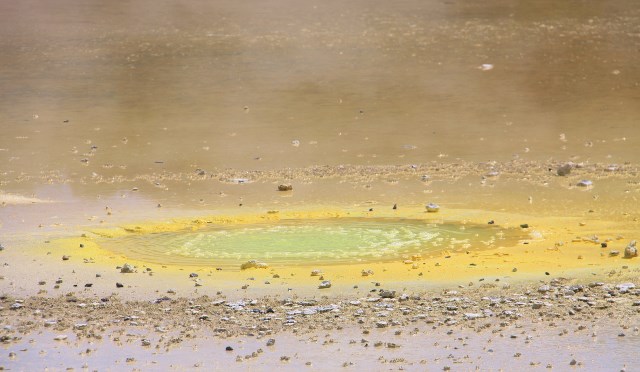 White Island, the newest volcano, can be reached by boat off the coast in the Bay of Plenty. The Coromandel Peninsula is known for the Hot Sand Beach and the very scenic Cathedral Cove.

Driving along, the road sides everywhere were littered with Brushtail Possum carcases, victims of traffic fatalities. The latest estimates have their numbers at over 70 million! These furry critters, about the size of a cat, are a major invasive pest. First introduced from Australia in the late 1800s by the fur trade, they now cause huge damages to the fruit orchards, spread Bovine Tuberculosis to cattle and destroy eggs and young of many bird species.

The Department Of Conservation (DOC) has declared an all-out war attempting to at least reduce the Possum population, together with other introduced predators, such as rats, ferrets, feral cats and dogs.

On the bright side, the numbers of the Northern Brown Kiwi on the North Island are on the rise, mostly due to conservation efforts. The Kiwi House and Native Wild Bird Park in Otorohanga is another “Must-See” if you have a chance to visit these islands. They have 18 Kiwis in their breeding program. The young birds are placed in nature reserves in remote mountain areas or on offshore islands where the birds are safe from predatory mammals. Access to these areas are usually by special permit only.

Did you know there are 5 Kiwi-like flightless birds of the order Casuariiformes in New Zealand?

The Great Spotted Kiwi is also very territorial: at the Kiwi House we observed this behavior at feeding time; the keeper had prepared us before he entered the enclosure. This large, mottled grey fluff ball attacked the keeper jumping up on him kicking and scratching and pecking. It was so agitated it began calling, a loud rising scream: “Krrrreeee! Krrrreeee!” Quite a display.

One of the island wildlife sanctuaries is readily accessible to visitors: The Tiritiri Matangi Island north of Auckland is managed by DOC and can be reached by ferry. There you might be able to observe rare birds like the North Island Saddleback (Tieke), the Blue-wattled Crow (Kokako), the Stitch Bird (Hihi) and the very rare South Island Takahe (no English name). A species of Gecko and Skink have also been reintroduced to the island.

Further north, near Russell, at the Bay of Islands, we found another hidden gem: the Orongo Bay Holiday Park campground. We were very pleased to learn that the Managers of this site are actively involved in habitat restoration and are members of eBird. We parked our small camper van backing on to trees and shrubs at the edge of a marsh. This area is home to another, less well-known flightless bird: the Weka. The Weka is about the size of a plump chicken with long sturdy legs. Its primaries have evolved into soft coverts. The wings form a smooth mottled brown coat over its body. Note her beautiful red eyes. Many New Zealanders have never seen a Weka. We shared our campsite with a hen and her 2 chicks plus a flock of hybridised Mallard/Grey Ducks. 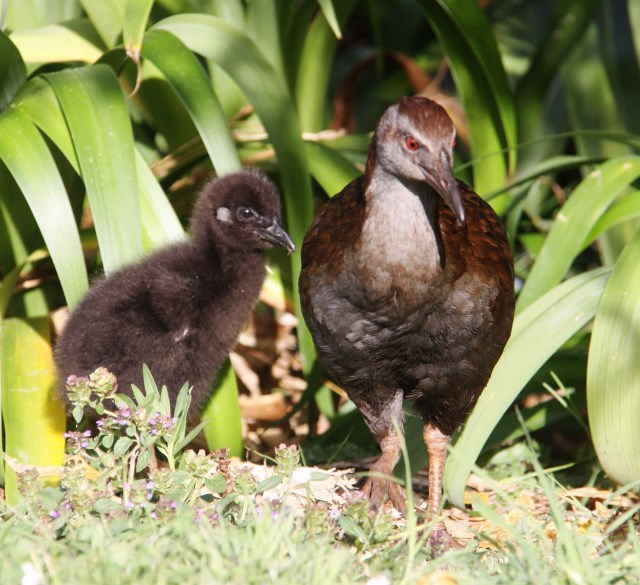 The North Island Brown Kiwi also inhabits this area. As all nocturnal birds, it is difficult to spot, but its loud cries can be heard after dark. The More Pork (Ruru), a small owl named for its repeated calls, arrived in New Zealand on its own from Australia. It is now common and widespread on the islands.

One more comment about camping in New Zealand: Campsites are beautifully clean and quiet, just as in Australia, without any “nasties” – no crocs, snakes or really venomous spiders. The Red-tailed Spider can inflict a painful bite, we heard, but never saw any of them. DOC manages many campgrounds. As a rule, they are more primitive than the other commercial sites. One regrettable detail: no campfires are allowed.

Posted On April 13, 2014
Those NFN members who braved the snowy roads on November 12, 2013, to attend our regular monthly meeting were treated to a unique presentation in…

Posted On June 26, 2013
Story and photos by Shelia Smith The moon was sailing in and out of clouds and the wind was howling when I woke on January…