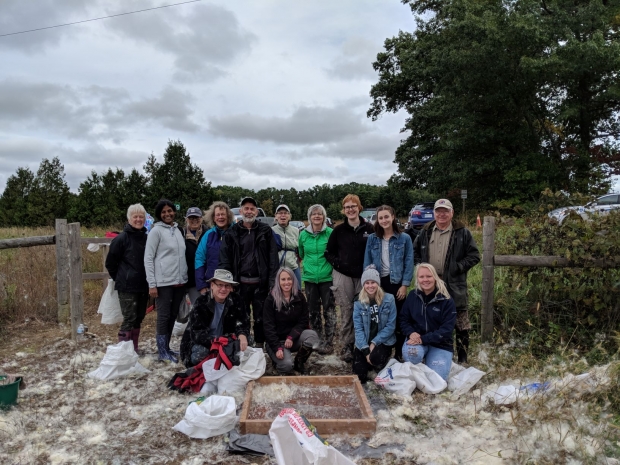 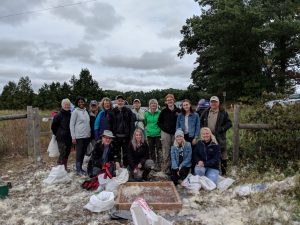 When I saw the notice about the “Marvelous Milkweed Seed Collection” event circulated to Norfolk Field Naturalist members, I was intrigued. Sponsored by the Nature Conservancy of Canada, the event was scheduled for Friday, October 5th.

The purpose was to collect milkweed seeds that would be used for meadow restoration in the Backus Block. It was pitched as a three-hour commitment, which didn’t seem like a lot, so I thought I’d take the plunge.

I had my first pleasant surprise of the day when I joined the circle of volunteers as the coordinators did their pre-event sign-in. Two of my former Simcoe Composite School classmates whom I hadn’t seen in forty years had also volunteered to help out that day, and it was great to see them.

Right on time, the event began. We got a short briefing from the organizers. The task seemed simple enough—collect milkweed pods. We were each given a large plastic mesh bag, the kind 50-pound servings of sunflower seeds come in, and we were on our way.

A small group of us opted to take the trail westward before heading out into the field. Soon enough, we were ready to strike out into the field of vegetation. Only the small evergreens still bore bright colors. The rest of the field was all beiges and browns.

I made my way through waist-high plants, grasses, and shrubbery, having to take care to elude the odd vine tugging on my foot. 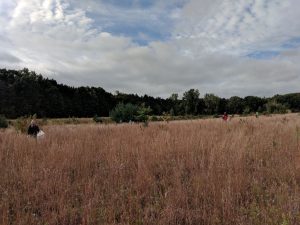 At first, milkweed plants were few and far between, but after a couple of minutes of walking, I spotted one, then a grouping. After that, it always seemed like another plant was in sight once the present one had been dealt with.

Some of the milkweeds had already released their seeds, but there were also plenty of intact pods, and I soon had gathered a satisfying amount at the bottom of the bag.

It was a meditative sort of activity. There was no reason to rush. Rather, the exercise of seed collection seemed a good excuse for living in the present, focussing on the current plant to be harvested, then locating the next. While I was working, I found myself thinking about the monarchs and the difficult journey ahead to their wintering grounds. How many of their descendants would make the trip back, I wondered?

I had no way of knowing the answer, but at least, by collecting the seed for others to plant locally, those butterflies that do visit the area next summer will have additional options for feeding their hungry caterpillars.

As I wandered through the field, I kept an eye out for ticks, and was initially startled when I looked down to spot some roundish objects clinging to my pants. Fortunately, these turned out to be what one participant referred to as “woolly pads”, round, flat seed pods that clung with the tenacity of burrs. I was relieved they weren’t insects, as I’d initially thought at first glance; but less enthused that I’d wandered through them with such carefree abandon that my track pants were liberally covered. I made a mental note to learn what the host plant looked like and keep a closer look-out next time.

Finally, the bag of seed pods seemed sufficiently heavy that it became a nuisance to haul around, so I headed for the rallying spot at the entrance to the field, where a screen with a tarp under it was set up. The idea was to open the pod and grate the innards against the screen, with the seeds falling off, the fluff blowing away, and the core of the pod remaining to be cast aside. Soon the air was filled with white, as though an early snowfall had arrived. The more prudent seed harvesters set themselves in a position upwind of the fluff; those who came later had less choice.

Though it got a bit crowded around the screen, the seeds could also be harvested by hand, by plucking them off the pod one by one.

Just after noon, those of us in the volunteer group headed out. A crew of university students was scheduled to arrive later in the day to continue harvesting and sorting the seeds. The time commitment seemed just right, for me—long enough to feel I’d made a contribution, but short enough that I could still get other things done that day—and feel up to doing them.

As a side bar, one of the event participants mentioned, as we were walking out to the field, that milkweed fluff was used by the pioneers as a form of insulation. I checked it out online and apparently, that’s still a thing. For example, there’s a Quebec clothing manufacturer who offers a coat that uses milkweed fluff as insulation. Another reason to love milkweed!

Overall, I found the event to be well-organized and well within my capabilities; and was glad the NFN had passed the information on. The online registration through the Nature Conservancy was easy to do, and the pre-event information package emailed to us was very comprehensive. We also received a post-event thank-you email, in which the organizers informed us that 2.5 kilograms of seeds (estimated to be around 352,000 seeds) were collected that day, destined to be used in the restoration of a 29 ha farm field to biodiverse pollinator habitat.

All in all, the milkweed seed collection event is definitely something I’d do again.

Posted On December 16, 2019
Report by Jan Grincevicius Twice a year the member clubs under the umbrella of Ontario Nature, Carolinian East Region, meet to update their activities and…