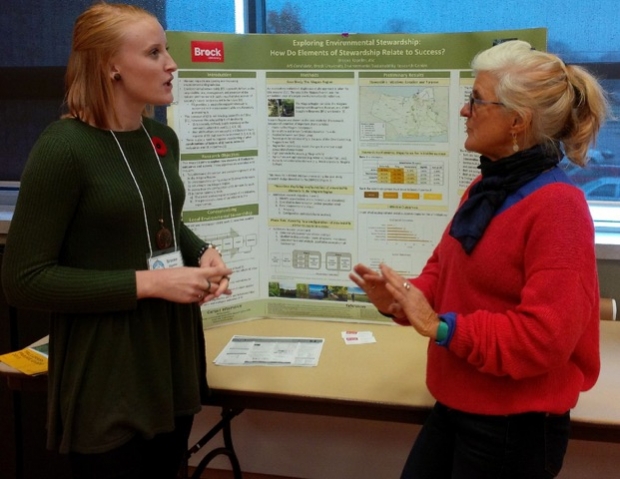 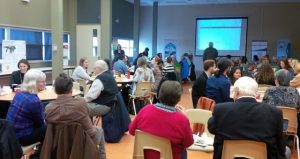 This was my first time attending the Long Point World Biosphere Conference, which was held in Simcoe. There were 85 people registered—the largest number yet according to Administrative Coordinator Sandy Jukes. Registrants included three Norfolk County Councillors, and Norfolk’s new Mayor-Elect, Kristal Chopp.

After a traditional Metis Elder welcome from Leon and Margaret Fleury, Long Point World Biosphere Reserve Foundation (LPWBRF) President Rick Levick opened the conference and talked about its beginnings. He said that while working on LPWBRF projects on Phragmites control and Eco-passages, they kept meeting scientists and thesis students doing research within the Biosphere. The conference was designed to bring all of these people together, to share their collective research and insights. Kristal Chopp welcomed attendees and mentioned the value of ecological initiatives like the eco-passages, and recent tree plantings.

There were 22 presenters over five hours. They included biologists from provincial and federal government agencies, local organizations like Bird Studies Canada and the Nature Conservancy of Canada, private ecological consulting firms, and thesis students from various universities. At the end of the conference, presenters were asked to submit a copy of their presentations to the LPWBRF to be added to the growing database on their website, www.longpointbiosphere.com. This database contains research and reports relating to the Long Point Biosphere, covering many decades.

I have summarized a few of the presentations to give a sense of the range of topics.

Brittany MacLeod talked about the $500 million Nature Legacy for Canada Fund, and how the focus was on projects with an ecosystem-based approach, conserving priority landscapes to protect species at risk. She emphasized that this was being done working with local partners, including all levels of government and NGOs. A Norfolk County priority project is protecting the Long Point Walsingham Forest.  Two workshops were held in Port Rowan this past spring to develop a shared vision with local partners.

Working with Ontario Nature, Heather and Ryan are examining the habitats of Gray Rat Snakes, a Species-At-Risk, in specific Ontario populations. In the Carolinian population, there are four sub-populations. The Big Creek population is the largest and most robust, but faces many severe threats, and had not previously been well studied.

Using radio telemetry, Heather and Ryan have been tracking individuals to determine what habitats are being used by the snakes, and how. They are finding that the snakes like a “mosaic”, using a lot of edge habitats. Large forested riverine corridors, like Big Creek, are ideal, along with large forested areas in general.

They found that the snakes they were tracking were 500-2000 m from the hibernacula, which was consistent with other studies. I spoke with Ryan Archer after the conference and asked him if he had any specific comments about the Gray Rat Snake population in Norfolk County. He said in the past, populations had been estimated using mostly anecdotal sightings, and that this approach was not very accurate. This study will help to develop a clearer understanding of suitable habitat for the snakes, and then this information can lead to stewardship initiatives. He said that they were always looking for opportunities for outreach with local groups, like the NFN and others. This study is now in its second year. 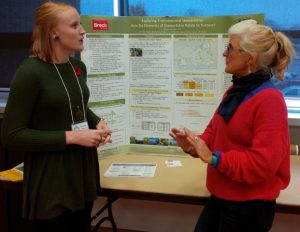 This was one of the five-minute (“poster”) presentations from students doing relevant research on environmental issues of interest to the Conference attendees. Brooke is doing a comprehensive overview of environmental stewardship initiatives in the Niagara region. She contacted 36 organizations in the area and had 20 that responded to her survey.  She is now interviewing these organizations to determine what approaches are most effective for environmental stewardship.

Julie and Liv spoke about the scope of the NCC’s involvement in land acquisition, conservation, and management across Canada, and specifically in Norfolk County, focusing on the Norfolk Sand Plain area. Restoration goals include increasing habitat size and complexity, so agricultural fields were being restored to native species; invasive species were being controlled, and earthworks were being built.

Earthworks develop wetland areas within the fields and involve moving a lot of soil to create berms and ponds. This excavation/berm building process has the added benefit of stirring up old “seed banks”, long buried, but still viable, which then begin growing. These natural phenomena reduce costs of restoration and ensures that the species being established were previously growing in the area.

Succession management for these natural areas is complex — the goal is to have all successional stages represented at the same time on different sites. Site-specific plans are developed for each, and can include actions such as mechanical thinning, controlled burns, and management for invasive species.

The conference was packed with information, and also provided many opportunities for networking and talking with other environmental professionals. Catering was provided by the Blue Elephant in Simcoe. It was a worthwhile day.

Posted On December 16, 2019
Report by Jan Grincevicius Twice a year the member clubs under the umbrella of Ontario Nature, Carolinian East Region, meet to update their activities and…