In Memorium: Harry B. Barrett 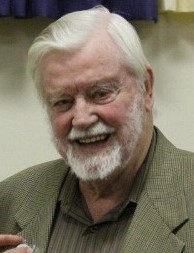 Harry B. Barrett at the NFN 50th Anniversary Gala

On January 26th, 2017, the NFN and the entire community of Norfolk County lost one of its greatest. Harry B. Barrett was a philanthropist, historian, naturalist, family man and a dear friend of so many.

In 1962 Monroe Landon, another of our great naturalists, called a meeting at his house. The objective was to revive the old naturalist club, which had fallen by the wayside during the war years. As one of the founding members of Norfolk Field Naturalists Harry B. Barrett was appointed the first President of the new club. In 2012 the NFN celebrated its 50th Anniversary and is today going strong after all these years. As a token of deep gratitude for his long and dedicated service to the NFN Harry B. Barrett was bestowed with the Honorary Directorship.

After finishing his general education he joined the local militia in 1939 and the Royal Canadian Navy in 1941 and was discharged as a lieutenant in 1945. With a BSA degree in Animal Husbandry from the Ontario Agricultural College, Guelph, he joined his father in the management of the family farms.

He served as a provincial appointee on the Long Point Region Conservation Authority, also Chairman of the Niagara Escarpment Committee instrumental in promoting the idea of Bruce Trail. He was a long standing member of the Lynn Valley Trail Association. An exceptional birder, he was a big supporter and donor raising funds for Long Point Bird Observatory and BSC participating in the annual Birdathons until a few years ago. He was a life member of BSC and assisted with banding.
He rarely missed an NFN event.

Harry B. Barrett was the recipient of many prestigious awards recognizing his commitment and dedication to the conservation of nature in Ontario. Recently he was inducted into the Norfolk Agricultural Hall of Fame.

Adding to his achievements, Harry B. Barrett was the author of several interesting and informative books, including The 19th Century Journals and Paintings of William Pope, Lore and Legends of Long Point, Murray and me, The Navy and me, The Parish of St. Paul’s, They had a Dream, Alligators of the North and The Nature of Norfolk.

On behalf of Norfolk Field Naturalists we would like to extend our deepest sympathy to the Barrett family. Harry B. will be sadly missed by all of us. He was laid to rest at a private ceremony and a public celebration of his life will take place in May.

Posted On July 26, 2015
By Michael McMillan Download the PDF of this article, which contains many beautiful photos. On May 9, at 6:30 a.m. I arrived at George Pond's…