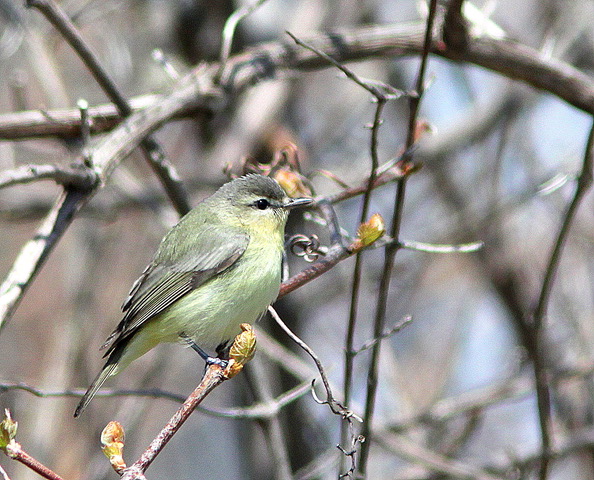 All Photos by the Author 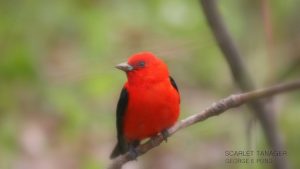 Well, another Great Canadian Birdathon is over. As usual, it was another fun, but tiring time. As a group we identified 132 species of birds and ate a cooler filled with chicken and other wraps, courtesy of the Blue Elephant in Simcoe.

For over a quarter of a century I have been doing the Birdathon with Bruce and Ann Falls from Toronto and Steve Wilcox from Port Rowan. This year Bruce and Ann had decided that it was time to retire and Steve was busy with his daughter’s wedding. Fortunately, Ricky Dunn and her son Jeremy Hussel, who had joined us a few years ago were keen to go, and I was able to recruit my friend Rick Dowson from Simcoe to join us. We were delighted when the “birding bug” caught up to Bruce and Ann and with the help of their daughter Catherine, as driver, they were able to join us for the first day. 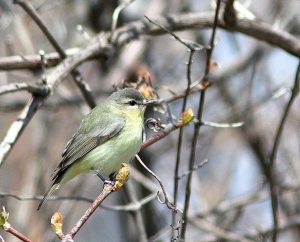 Two of the first few birds we saw were Scarlet Tanager and Philadelphia Vireo, both good sightings. The woodlot had a respectable number of new migrants and by the time we left we were just shy of 45 species. Things were looking good but we bombed with the expected Brown Thrasher at the Old Provincial Park.

The new wetlands created at the former Port Rowan sewage lagoons was good for a lingering Horned Grebe, Ring-necked duck, Common Gallinule and on a later visit a Virginia Rail. Cliff Swallows cooperated at the Port Royal Bridge as did Orchard Orioles at a feeder near Clear Creek; however, the White-crowned sparrows there a few days previous had apparently left for more northern climes. 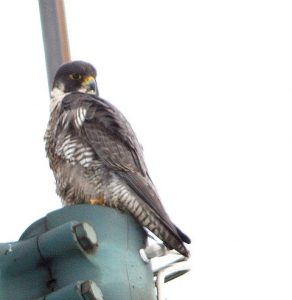 Along the side of Concession A, Rick spotted a very cooperative Wilson’s warbler, a warbler that I needed for my photo collection. I took several shots but when I put them on the computer they were all out of focus—maybe next year. Just down the road we stopped to search for Horned Larks and spotted a distant bird in the middle of a field. Some thought it was a crow, I thought a pigeon but when we got out the scope it turned into a beautiful Peregrine Falcon, only the third time recorded on one of my birdathons.

Driving to Port Dover we stopped at a friend’s house and found the expected bluebirds and Eastern phoebe and some heard a Pileated woodpecker. It was tough going but we were picking up a bird here and there and our list was steadily growing. Ring-billed and Herring gulls and Common terns were on the pier at Port Dover; a few Chimney swifts were flying over the downtown buildings. The Townsend lagoons were good for Northern Shovelers, Least, Semi-palmated sandpipers, dunlin, Lesser Yellowlegs, and Black-bellied plovers, a welcome addition as shorebirds were few and far between.

From the lagoons it was back to Long Point for marsh birds and a few hours’ shut-eye. From the lookout behind Bird Studies Canada we saw a small flock of ducks that contained Lesser scaup, Ruddy ducks, Redheads and an American Wigeon. Next, we stopped at the causeway lookout and heard an American Bittern and the faint “cuck-cuck- cuck-oo” of a Least Bittern. Marsh wrens and swamp sparrows were singing, a Wood duck flew over our heads. Northern Harriers and American coots failed to put in an appearance. At the gate to the new Long Point Provincial Park we heard a Woodcock and stopped to see it. It was tough to hear the bird as cottagers were setting off their holiday fireworks but we finally saw the male displaying to a receptive female. It was neat watching this intimate encounter with bursts of fireworks seeming to proclaim the continuation of the species.

We made one last stop, listening to Whip-poor-wills and saying goodbye to the Falls—then it was off to Ricky and Jeremy’s home for a few hours of sleep.

We were up at 4:30 a.m. and in Backus Woods at 5:00. It was cold and the forest was unusually quiet, but still the magical place that it is. Eastern Wood Pewees were singing; we heard a Yellow-throated vireo; and watched Hairy woodpeckers feeding their young. Great crested Flycatchers sang or called loudly. Wood thrushes were singing and we heard a Veery. A Cerulean warbler sang and Ricky and Jeremy saw it. I failed to see or hear it. Neither Hooded warblers nor a Prothonotary warbler sang or put in an appearance. I’m sure both were on territory, a couple of expected misses.

We checked out a grassy field where Grasshopper and Vesper sparrows can usually be found—no luck but a Tufted titmouse at a friend’s feeder did show, and on the way back to Long Point, Jeremy spotted an Osprey, an uncommon raptor in our area, but a welcome addition to our list.

Finally, at the Old Cut banding area we checked off a migrant Blackpoll warbler and just like that “Birdathon 2018” was over.

In all we tallied 132 species. Jeremy was the only one that can claim 100% of them but we all did well. I love doing “Birdathon”, but I love more the fact that every dollar raised for bird related conservation efforts helps to make this world a better place, not just for us but for future generations. So far, my usual sponsors and a few new ones have responded with close to $8,000. I’m sure by the time I hear from everyone, we will exceed that amount.

Posted On July 26, 2015
By Michael McMillan Download the PDF of this article, which contains many beautiful photos. On May 9, at 6:30 a.m. I arrived at George Pond's…

Posted On February 29, 2016
Compiled by: David Okines Greetings Counters, These are the results of the 29th Woodhouse CBC held on December 20th 2015. The Woodhouse CBC is centred…