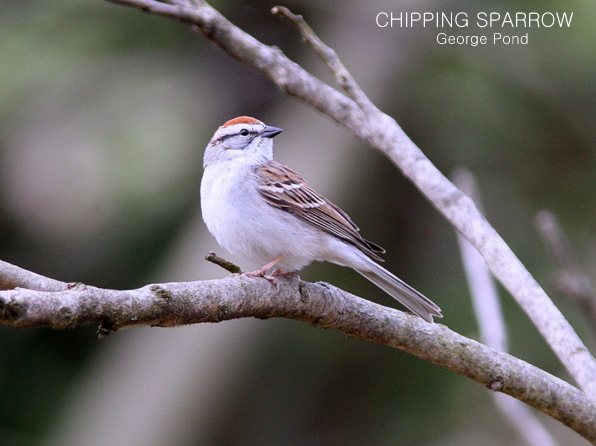 At 5:10 a.m. I arrived at George Pond’s to join George, Peggy McArthur, Allan McEwan and Shelia Smith for our eventful day. During a quick stop at a grassy area on Luscombe Drive across from Turkstra Lumber we heard the buzzing-insect-like sound of a Grasshopper Sparrow and the musical sound of a Song Sparrow. 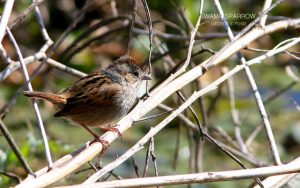 As we continued on our way to Bird Studies Canada to meet with Betty Chanyi, Diane Salter and Anne Wynia we stopped on Charlotteville Road 5 near Young’s Creek where a pair of Mallards flew over head and a singing Swamp Sparrow made its presence known. Further on, after crossing the Turkey Point Road, about 100 yards ahead of us a coyote trotted nonchalantly across the road.

After travelling south and crossing Highway 24 we turned west onto Charlotteville Road 2. Here we stopped at a place where trees lined the road and birded. The high-pitched “fee-bee-ee” whistle of a Black -capped Chickadee could be heard on one side of the road while on the other side the emphatic “teacher, teacher, teacher” cry of an Ovenbird rang out. Further along we detected the soft buzzy “beeee-buzz” song of a Blue-winged Warbler. Suddenly, a Common Yellowthroat we had been hearing popped up out of the ditch.

As we continued on our way to B.S.C. a Flicker flew past our vehicle. At B.S.C., now with our full group of eight, we checked the wetland and found a solitary Pied-billed Grebe. Barn swallows that were nesting under the eaves of the B.S.C. building flew around the deck feeding on insects while tree swallows fed over the water. Across the road was a martin house full of Purple Martins.

We then moved to the nearby Port Rowan wetland and saw three duck species: Lesser Scaup, Ring-necked Duck and Bufflehead. Also on the water were a Common Gallinule and a Horned Grebe, two water birds I had never before seen on a birdathon. During a quick stop at the Port Rowan Harbour we spotted a Forster’s Tern and a Rough-winged Swallow. As we were looking at two Tundra Swans, two Mute Swans and some American Coots at the lookout on the causeway to Long Point, three Black Terns flew over above us.

Old Cut on Long Point was productive for warblers and vireos. Warblers seen here were: American Redstart, Chestnut -sided, Yellow-rumped, Black-throated Green, Magnolia, Northern Parula, and Blackburnian. Vireos sighted were: Red-eyed, Blue-headed, Warbling, Philadelphia, and White-eyed. However, Old Cut did provide the most unusual sighting of the day — five Scarlet Tanagers at once, three on a bush near a mist net and two caught in the net.

At the nearby Old Provincial Park, we listened to a Brown Thrasher perform its repertoire of songs. Here I also added a Gray Catbird, a Rose-breasted Grosbeak, a Cedar Waxwing and a Downy Woodpecker to my list. 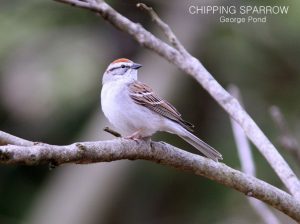 We then headed west along the Front Road stopping to see Cliff Swallows nesting under the bridge at Port Royal. Also here was a Blue-gray Gnatcatcher flitting in a bush by the creek. Continuing west we reached Betty Chanyi’s house. At Betty’s birdfeeders were a White-crowned Sparrow, a Chipping Sparrow and a couple of Orchard Orioles. On the ground nearby was a Swainson’s Thrush.

Our first stop after lunch was at Backus Woods where we had an excellent lengthy view of a Prothonotary Warbler and its reflection as it hopped along a log near the water. In the forest we also saw a Hairy Woodpecker and heard a Pileated Woodpecker and a Great-crested Flycatcher. We then travelled south down the Walsingham East Quarter Line to check out an Eagle’s nest. No adult eagles were visible but through a scope it was possible to detect the movement of a young eaglet in the nest. 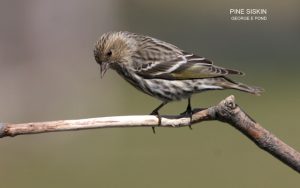 Since we were close to Audrey Heagy’s house we decided to check her bird feeders for a Titmouse. We didn’t get the Titmouse but I did see a White-breasted Nuthatch, a Pine Warbler and a pair of Eastern Bluebirds on her property.

Now travelling east on the Front Road we picked up a Bobolink in a field just west of Port Ryerse. At the same spot a Northern Harrier flew low over another field. As we drove down Main Street in downtown Port Dover a Chimney Swift flew above us. At the harbour on the breakwater were Ring-billed Gulls, a Herring Gull, a Greater Black-backed Gull and a Bonaparte’s Gull. A large Caspian Tern dwarfed some nearby Forster’s Terns.

We moved on to Nanticoke to find a Great Horned Owl’s nest that George was aware of. It didn’t disappoint. A very large but not yet fledged young owl seemed to stare back at us as we looked at it. A Wild Turkey was spotted on the Lynn Valley Road as we headed back to Simcoe to call it a day.

My total species count for the day was 95. I am grateful to the excellent birders I was with. Without them I would not have been as successful.

When all the money is collected the total should exceed $4,000. To all of you who sponsored me, a big thank you for raising this money for bird research and conservation across the country.

Posted On July 26, 2015
By George Pond Download the PDF of this article, which contains many beautiful photos. “Turn down the next road! Yesterday there was a flock of…