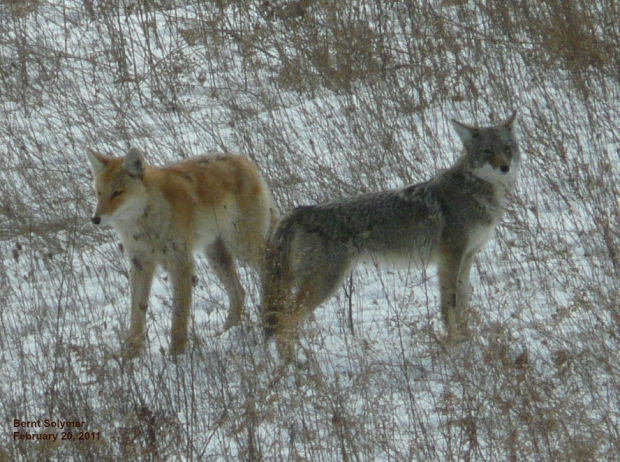 The NFN Information Session on Coyotes was a Big Success!

Late last year a couple of individuals made a deputation to council about the “disturbing” increase of coyotes in Norfolk County over the last year or two. They claimed that coyotes are a threat to pets and humans. Their angst was due to a small dog being attacked on a home owner’s driveway at night about 2 years ago and residents in Port Dover and Port Rowan (primarily) seeing coyotes in broad daylight.

As a result, over the last few months of 2015 coyotes received a lot of local press and social media coverage.

After some FaceBook exchanges with a number of persons, and a whiff in the air that Council was bowing to pressure from a few individuals, our Board of Directors decided to hold a special public information meeting to try to bring some understanding and clarification about the biology and habits of this highly adaptive and intelligent predator.

On December 10th we hosted speakers from Coyote Watch Canada (CWC), at the Simcoe Research Station auditorium on Blueline Road.

The response was overwhelming – over 100 people – resulting in standing room only!

CWC is a not-for-profit organization, which has studied coyotes and coyote-human interactions for almost 20 years.

Their organization provides public education on the biology and ecological role of these animals, as well as government consultation, and municipal wildlife framework models on how communities like ours can co-exist with coyotes. It was heartening to see that 3 councillors and a staff member attended the meeting.

Some of the points she made that really stood out were:

The crowd was polite and obviously interested, whether they liked coyotes or not. There was a farming couple there that owned sheep and they were very upset about losing lambs to coyotes. Lesley was sympathetic (rightly so) and offered to visit them at a later date to provide some constructive advice on how to handle their problem. All in all a really good meeting with lots of great information and visual aids.

A very good article covering this meeting in the Simcoe Reformer a few days later was a bonus.

Posted On April 9, 2020
Status: Threatened — “Threatened” means the species lives in the wild in Ontario, is not endangered, but is likely to become endangered if steps are…

Posted On July 18, 2018
By Inga Hinnerichsen In the past year I have helped out with ongoing work at the St. Williams Conservation Reserve. The forest reserve consists of…

Mushrooms: The good, the bad, and the ugly

Posted On December 7, 2015
...and the Weird and the Wonderful, too. Story and photos by Inga Hinnerichsen Originally published in 2015 December Lotus Enter the mysterious world of Fungi.…