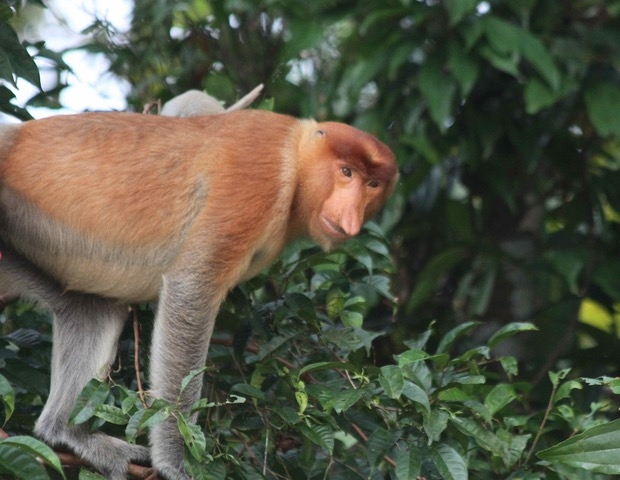 (All photos by the author) 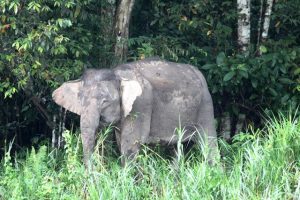 I suppose my “Bucket List” desire to visit Borneo goes back to my public school days of reading National Geographic. Here was a country still covered with pristine rainforest, where head hunters once roamed the dense jungle; where herds of wild Asian pygmy elephants were common, Orangutans claimed their canopy territories, where troops of Long-tailed and Pig-tailed Macaques lived in groups of 20 or more animals, and strange looking Proboscis monkeys, with their funny noses lived in trees along the river valleys. Here eight species of Hornbills, birds with massive bills, would fly overhead or sit on exposed limbs of dead trees; and various species of hawks and eagles patrolled the rivers searching for whatever nature provided. A land of abundant wildlife. 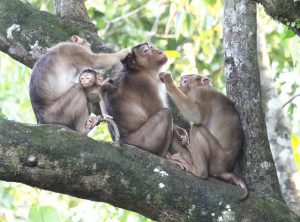 Well, the head hunters have long disappeared as has most of the pristine rainforest, replaced by millions of acres of Palm Oil trees. In less than 100 years, only small patches of primary or secondary rainforest remain, mostly along the river courses or the steep mountain hills. Fortunately, they are now protected. Here can still be found some of the wildlife that I saw in those National Geographic books so many years ago and here I was able to spend nearly a week in March 2018 with family members experiencing some of those boyhood dreams.

We stayed three nights at the award-winning Sukau Rainforest Lodge, from which National Geographic and David Attenborough have filmed. Very early morning boat rides (12 people in outboards) saw us cruising along the shores of the Kinabatangan River searching for birds, primates, including Borneo’s iconic Proboscis Monkeys and especially Orangutans, as well as the Borneo Pygmy elephants. 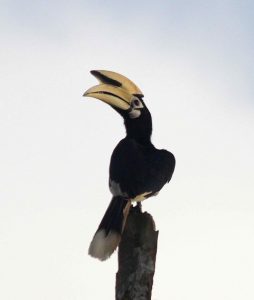 We saw five of the eight possible species of hornbills and a number of different raptors. A kilometre-long covered boardwalk meandered through the rainforest and, although it was extremely hot and sticky, I found myself wandering on it looking for lizards, butterflies, birds and whatever else nature was willing to share. I was usually by myself, not like the hordes of people that had jammed the streets of China’s Beijing a few days earlier.

This was not a birding trip, nor was it designed as a nature trip (except for this little time at this wonderful tranquil lodge), but a trip that my daughter Heather put together that included China, Thailand and Borneo. I’m sure that an organized birding tour would see far more species than we did, but I was certainly satisfied with our results.

We had previously visited an Orangutan and Sun bear (world’s smallest bear) rehabilitation centre in the town of Sandakan where we saw several of each and it was great to know that the country is doing what it can to rehabilitate injured or orphaned animals and protect what little is left of the once great rainforests of that country. 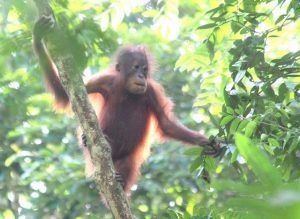 Nothing gives me a greater thrill than to see an animal, bird, reptile or any form of wildlife in the wild. When I can get a usable photograph I’m doubly thrilled; and, although our time “in nature” on this trip was short, it was very rewarding, and I thank my daughter for organizing it.

Posted On December 10, 2019
By Jan and Len Grincevicius We had talked about going on an Alaska Cruise since we retired almost 10 years ago. This year, we decided…

Posted On October 17, 2018
by Inga Hinnerichsen (Note: All photos by the author unless otherwise indicated) Finland: The land of the Midnight Sun, thirty thousand lakes and five thousand…