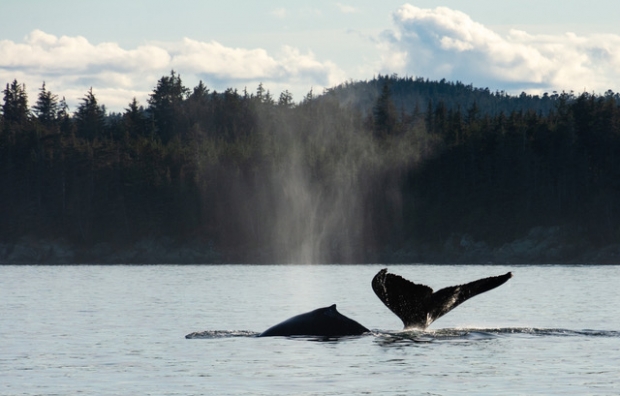 By Jan and Len Grincevicius

We had talked about going on an Alaska Cruise since we retired almost 10 years ago. This year, we decided it was time. Since we had never been on a cruise before, we decided to just do one that was seven days. The cruise left from Vancouver, so we arrived a few days before and hit some spots such as Granville Island, Stanley Park (English Bay, Siwash Rock, Prospect Point and the Lions Gate Bridge), and a beautiful classical Chinese garden created by Dr. Sun Yat-Sen. Unfortunately, the rain and heavy cloud cover didn’t allow a visit to Grouse Mountain or Vancouver Lookout. 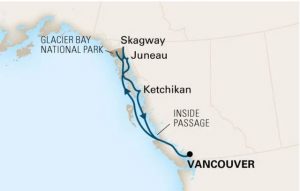 Map showing route of the Alaska Inside Passage cruise

Our cruise took us from Vancouver to Juneau, Skagway and Ketchikan and back to Vancouver. Alaska’s Inside Passage is a protected network of waterways that wind through glacier-cut fjords and lush temperate rain forests along the rugged coast of Southeast Alaska.

The program on the ship focused on education. Every day there were presenters and videos explaining where we were and what to expect to see in terms of wildlife. There was an environmental educator on board who spent four hours each day on the upper deck helping passengers spot wildlife. In addition, she gave a presentation each evening regarding some aspect of the natural history, the wildlife of the area or the environment and the effects of global warming.

Our first port of call was Juneau which is the capital of Alaska. The city is remote and can’t be accessed by road — you have to arrive by cruise ship, ferry or plane. The area of Juneau became what it is thanks to the Gold Rush in the 1880s. And, mining remains an important aspect of this location. 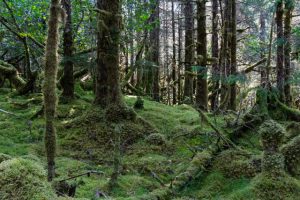 While in Juneau, we went on an excursion titled “Mendenhall Glacier Trail and Whales”. We learned about the interdependence of species and the many connections between the land and sea. Our guide shared stories and identified many plants as we travelled on a one and a half kilometre-long hike through a moderate rain forest along a wooded path.

The area was once completely covered by the Mendenhall Glacier which is 22 kilometres long, located in Mendenhall Valley, and about 19 kilometres from downtown Juneau. It is the largest glacier accessible by road in southeast Alaska. The glacier is fed by the 3,000-square-kilometre Juneau ice field.

We saw salmon, signs of black bears, many indigenous plants and fungi in this small corner of the Tongass National Forest. On the shore of the inland lake, which is fed by the Mendenhall Glacier, was a piece of glacial ice. Because the ice is greatly compacted, it was surprisingly heavy for its size.

Later in the afternoon, we boarded a custom-built vessel to look for whales and other marine wildlife in Stephens Passage, a renowned whale watching and wildlife refuge. We saw humpback whales, orcas, sea lions, seals and many kinds of sea birds. 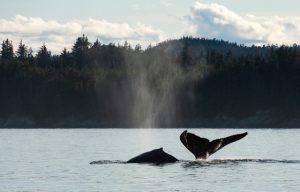 The next centre we visited was Skagway which served as a starting point for prospectors on their quest for gold in the late 1800s. This city retains its charms and gives visitors a chance to glimpse into this chaotic time in Alaska’s past.

While in Skagway, we went on the “White Pass Rail and Yukon Expedition”.

Our adventure began on the docks of Skagway, but after a short bus ride we boarded the White Pass and Yukon Route Railroad for an unforgettable ride up the historic and breathtaking narrow-gauge track. At the end of the rail line, we boarded another bus and were soon climbing the South Klondike Highway to the top of the White Pass—1,004 metres above sea level—with views of majestic peaks, waterfalls, and glaciers.

Leaving White Pass behind, we entered Canada and the unspoiled and untamed beauty of the Yukon Territory. We passed through the chain of lakes that form the headwaters of the Yukon River, and explored the rustic town of Caribou Crossing (Carcross). We saw the world’s smallest desert and listened to tales of the Klondike Gold rush provided by our guide. We stopped at Caribou Crossing Trading Post for a great lunch. At the Dog Mushers’ Village, we visited with Iditarod dog mushers and interacted with some puppies who were bred to become sledding dogs. 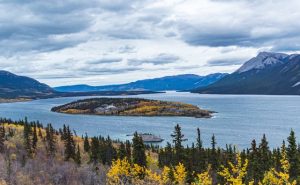 As much fun as we had up to now, the highlight of our week on the cruise ship was the full-day cruising around Glacier Bay. Because our ship was of medium size (capacity of 1,918) and our cruise was in September (after seal birthing), it was able to enter inlets that other ships could not.

The fjord is very deep, averaging 304 metres. More than 3.2 million acres of forest, mountain peaks rising over 4,500 metres, and glaciers surround the eight-kilometre-long bay. Tidewater glaciers are rivers of ice that flow to the sea and calve large chunks of ice into the ocean. We got up close to several glaciers, including Composite, Reid, Lamplugh, John Hopkins and Margerie.

There was regular on-board commentary from early morning until mid-afternoon about the various glaciers and the area, in general, by National Parks rangers. As well, we saw a cultural presentation by a local indigenous person, a member of the Wolf Huna Tlingit clan. The Tlingit enjoy a complex, socially organized matrilineal society. Through their mother, children inherit their clan. These people have always had a strong connection to the sea.

Our last port was Ketchikan which is the most southeastern city located on the Inside Passage in Alaska and is known as the ‘Salmon Capital of the World’. Most of the city’s revenue is based on tourism and fishing. The town is named after the Ketchikan Creek that flows directly through town. The location features an oceanic climate moderated by its maritime location, offering mild summers with temperatures averaging in the mid 60s but lots of rain year-round.

We certainly enjoyed this trip as were lots of activities and we learned and saw so much that was of interest to us, being people who enjoy nature.

Posted On November 1, 2018
By George Pond (All photos by the author) I suppose my “Bucket List” desire to visit Borneo goes back to my public school days of…

Posted On October 17, 2018
by Inga Hinnerichsen (Note: All photos by the author unless otherwise indicated) Finland: The land of the Midnight Sun, thirty thousand lakes and five thousand…