Across Canada: A geographical journey 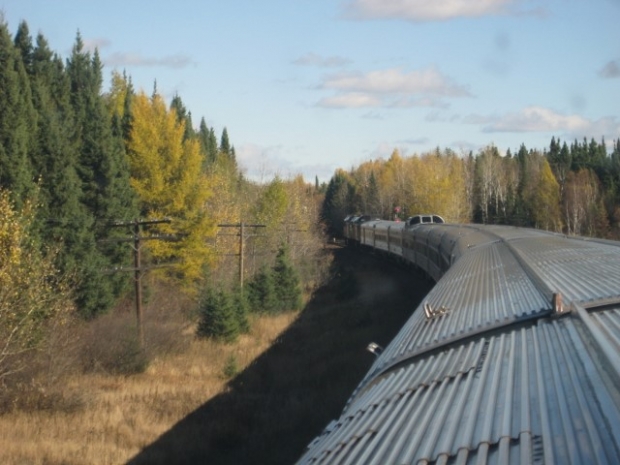 Story and photos by Inga Hinnerichsen

Author’s note: My apologies for the fuzzy quality of the photos. The train wouldn’t slow down for photo ops.

A couple of years ago, during one of our trips to Australia, we traveled by the “Ghan” (called so, because of the Afghan camel drovers imported to access the interior), a famous train leaving Adelaide in the south and arriving in Darwin in the north 4 days later. We caught the train half way through the journey, in Alice Springs in the Red Centre. I have always liked train travel. Both Dave and I have travelled by rail in Europe a fair amount in the past. The Ghan is a notch or two up from your typical passenger train with comfortable private compartments including a small bathroom. The dining car menu and service is definitely top drawer. Everyone dresses for dinner. A lounge car with soft seating provides a great opportunity to socialize with your fellow passengers from all corners of the world. All meals and refreshments are included. The Ghan makes a few stops, 3 – 4 hours a piece, along the way providing choices of activities such as camel rides, helicopter tours, boat tours in scenic gorges, etc.

We caught the train bug.

Dave looked for another trip and we decided on a cross Canada journey by VIA-Rail, called “The Canadian”. The timing was just perfect. I had just completed four Mushroom Identification hikes. This year it was particularly challenging because of the hot and dry weather we had in September. There were no mushrooms on the ground at all, only the tough shelf brackets that fruit on tree trunks and rotten wood. I had to do some quick and furious studying of these fungi that normally don’t show up very high on my radar screen. Including my far and wide pre-scouting and scrounging for samples (plus my regular outings with the dogs), I figured I walked at least 50 km during two consecutive weekends. Phew.

Four days on a train lounging around was just the ticket. We flew to Vancouver, took a taxi from the airport to the railway station and hopped on the VIA Rail train destined for Toronto. This twice a week service is a regular passenger train, a far cry from the high end Ghan. Passengers have choices of comfort levels (and ticket prices): couch – comfy seats that recline, small private compartments complete with a small toilet and the deluxe version of the same. We travelled in the not quite deluxe compartment. The car attendant would set up the bunk beds while we had supper and in the morning he’d flip up the beds and set up the comfy seats for day use. 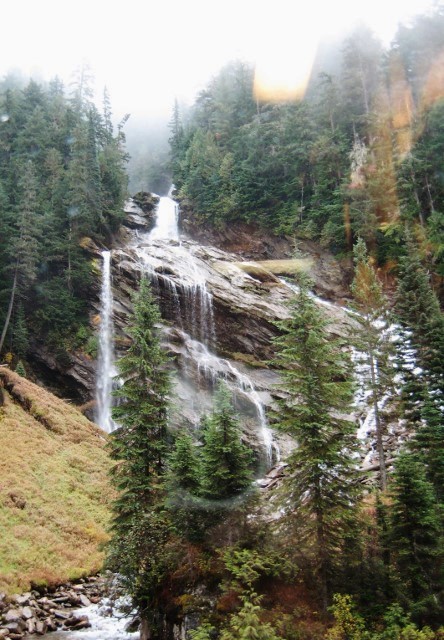 It was already dark by the time we left Vancouver, so no scenic vistas of the Fraser valley. In the morning, the train was stopped in Kamloops in the interior BC waiting for a freight train to pass on its way to the west coast ports. During our trip, we had to pull over on sidings numerous times to let the freight traffic through. This was a particularly busy time of the year with the grain harvest from the prairies being shipped west for export. Canadian National Railways owns the track and VIA pays rent to use it. The freight traffic has the right-of-way. We were made aware of the delays, but since we were in no great hurry, it was fine.

The area around Kamloops is a semi-desert. It sits in the rain shadow behind the coastal mountain range where most of the moisture from the Pacific Ocean falls along the western slopes feeding the Pacific rainforests. The summers are hot and dry, the valleys and hills are only sparsely dotted with hardy pines and junipers. The train continued east climbing higher into the Rockies. We caught glimpses of fresh snow at the higher altitudes through gaps in the low-hanging clouds. The forest became dense and dark with hemlock and fir. This is the preferred home of the Varied Thrush. During the nesting season, you can hear the haunting, eerie single tones of these beautiful birds echo and fade in the forest. All day we marvelled at majestic mountain vistas arriving in Jasper at dusk.
The morning brought views of wintry Alberta prairies. Ho hum, you’d think. What’s there to look at on the prairies for two days? Nothing but flat land as far as you can see, right? – Wrong! The land rolls gently alternating with deeper river coulees and shallow sloughs crowded with migrating waterfowl. Mule deer (and some cattle) graze near aspen groves and big raptors soar in the sky. With any luck at all you can spot a herd of Pronghorn Antelope, the second fastest land animal on this planet bettered only by the Cheetah. No wonder this is called Big Sky Country. There is an ever-changing drama unfolding above the prairie: distant dark snow squalls, sudden sun rays breaking through the clouds, small patches of blue appearing in the rolling grey, a perfect backdrop for flocks of flying ducks, geese and Trumpeter Swans. Never a boring moment! 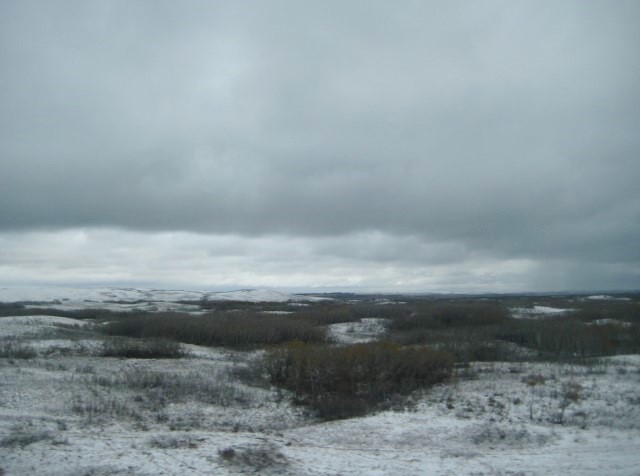 We quickly settled into a daily routine. We decided to skip the dining car breakfast – three big meals a day is just too much. Instead we walked to the lounge five train cars away around mid-morning. There was a coffee/tea station with juices, cookies, muffins and fresh fruit, perfect for a light meal. We had reservations for the last lunch and supper seating in the dining car. Again, the food was excellent. So was the company. We were seated at tables for four and met several very interesting travellers from as far as Australia, New Zealand and Hawai’i. We met another couple who had also done exactly what we did: Fly to Vancouver from Toronto and take the train back. We were not the only crazies! Between meals we enjoyed reading, looking at the scenery floating by and taking photos out the train window. The VIA lounge car was somewhat lackluster. You had to hunt down the lounge attendant who would open a locked cabinet in a galley to pour you a glass of wine.

Leaving the prairies behind the train continued into northwest Ontario. The landscape changed revealing the Canadian shield scraped and polished by the receding glaciers of the last ice age with alternating lakes, rivers, muskeg, alvars and boreal forest. It reminded me of my old native land, Finland. The train tracks don’t follow the Trans Canada Highway for most of the journey. In the past, I have driven across Canada twice. Unlike the highway, the train travels through large tracts of pristine wilderness until you get well into southern Ontario. The boreal forest began to give way to more temperate deciduous forests as we proceeded south. In early October, we caught the blazing autumn colours of tamarack, aspen, birch and maples as we crossed the French River and travelled through the cottage country north of Toronto. The train coasted into Toronto eight hours behind schedule. What a trip! If you ever want to get a good cross section of the vastness and amazing diversity of Canada, take the train.

We have already booked our next adventure: Planes, Trains and Automobiles…but that’s another story. 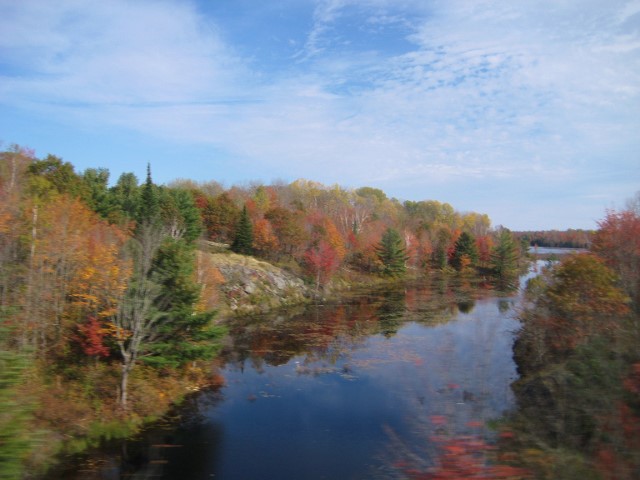 Posted On November 8, 2015
Report compiled by Inga Hinnerichsen The feral cat issue is a major one in Norfolk (as it is elsewhere). Research backs that up. Feral cats…

Bats: Facts on the Fly

Posted On June 26, 2013
Compiled from information published by: Bat Conservation Internationals Last October we had the opportunity to hear Lesley Hale from the Ministry of Natural Resources speak…