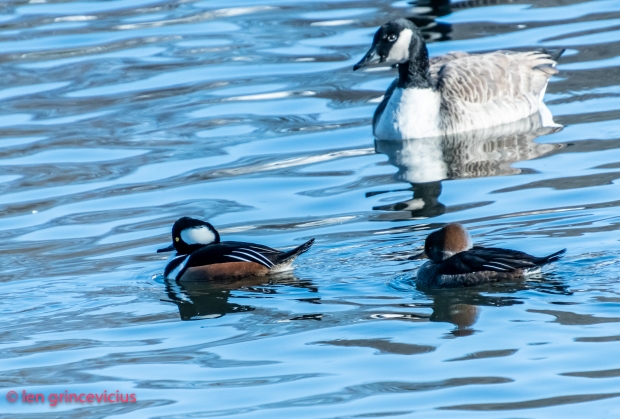 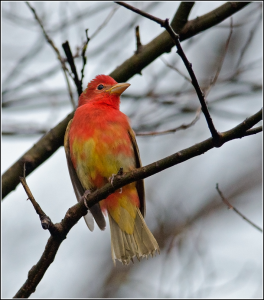 These are the results of the 35th Woodhouse Christmas Bird Count (CBC) held on Sunday December 19th, 2021. The Woodhouse CBC is centred 7 km east of Simcoe, at the crossroads of Highway 3 and Cockshutt Road at Renton, and roughly covers from Port Dover to Waterford and just west of Simcoe to east of Jarvis. Conditions were pretty much ideal with temps just below freezing, little to no wind, clear skies, and a light dusting of snow on the ground. 31 field birders covered the count area split between 17 groups, plus 5 feeder watchers.

While I initially reported we tallied 94 species, and then 95, I can confirm we tallied 94 species on the day which ties last year’s count as the 3rd highest species total ever, and the highest since the record of 99 was set in 2006. There were 3 new species added to the count, with a long-staying Summer Tanager as the bird of the count. It was frequenting two suet feeders on the same street in Simcoe; a rare bird to see in Ontario, and even more exceptional for it to be around in winter. The two other new species added to the all-time list were probably somewhat overdue: a Greater White-fronted Goose at the park in the downtown Simcoe, and a Vesper Sparrow near Townsend. A Blue-winged Teal near Townsend is also a notable find as it’s only the second one ever recorded during the Woodhouse CBC.

All told we set new highs for 11 species, with waterfowl and woodpeckers being counted in higher than average numbers due to the warm start to winter and a beautiful count day. Ravens continue to expand into the area with a record setting 14 recorded. Even if some of these roaming corvids were double counted, there were surely more than the previous record high of 3. Trumpeter Swans also saw a marked increase with 25 counted. This can likely be attributed to a growing breeding population near Waterford and it will be interesting to see how their population grows. 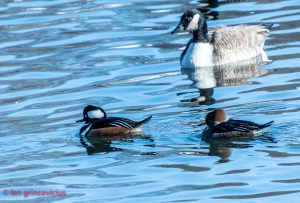 Great Black-backed Gull was missed during the count day, although one was seen just before. Great-horned Owl was missed again which is hopefully due to bad luck and not a sign they are declining. The 3rd Ontario Breeding Bird Atlas which is underway now will help answer that question. Ruffed Grouse was also missed and that seems to be a tough bird to get on the count these days.

Lastly, I’d like to thank all the participants for their time and effort that they put into making this count a huge success each and every year.  Each year is different and there are always interesting birds to be found! Next year’s count is on Sunday December 18th, 2022 and hopefully it will be as successful and enjoyable as this one.

Please see the full results below.

Posted On February 29, 2016
By Inga Hinnerichsen Third time's a charm. I've tried to participate in this regular outing for the last 3 years. One year it was cancelled…

Posted On July 13, 2014
By Michael McMillan Ricky Dunn, David Hussel, their son Jeremy and I were at the Townsend sewage lagoons when Jeremy located a Bobolink in a…